The Importance of Data Integrity With Sharad Chanana, VP of Revenue Operations 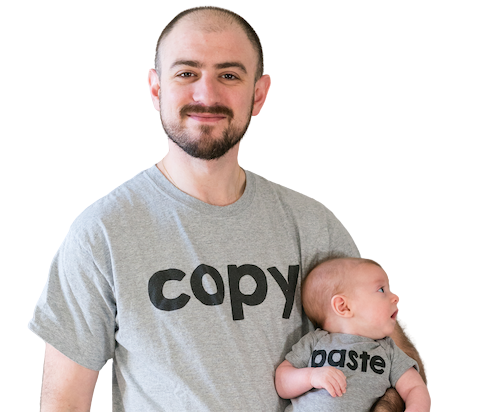 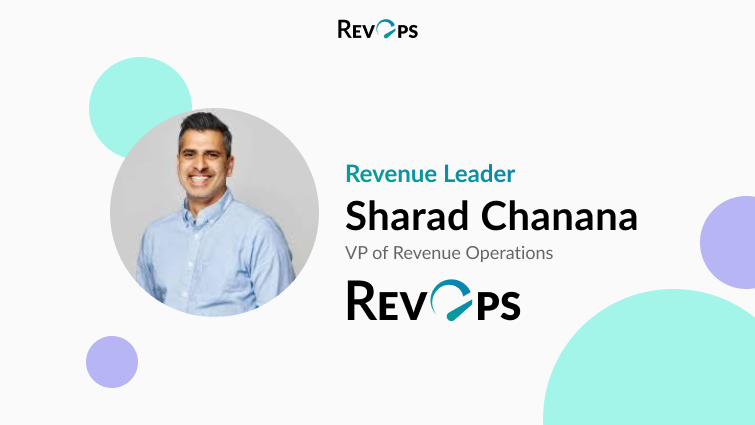 Throughout the interview, Sharad focused on the importance of data integrity and the need to build a Deal Desk function as early as possible.

For the sake of clarity, the following interview has been lightly edited.

Thanks so much for taking the time to speak with us today, Sharad.

Let’s start with a bit about your background and journey to the world of revenue. How did you find your way to your current position?

Thanks for having me. I’m happy to be here.

I started in the world of SaaS before it was the kind of household name it is today, back in 2006 at a Japanese company called Terarecon that built out medical machines. The company had both a hardware component as well as a software solution.

It was the first company that I’d ever worked for where billings and revenue worked together.

After I left that company, I joined a company in Mountainview called coupons.com, which was my first revenue role. I realized that the data we were booking was so dependent on order entry. And order entry was so reliant on Sales; Salespeople were dependent on the whole sales cycle, etc.

I became really intrigued by that; this wasn’t just accounting where you are just building Excel spreadsheets; dependencies in this environment trigger what we do in Finance.

I also became more immersed in technology like Salesforce.

In 2014, I joined a SaaS company called Ooyala, a pure SaaS-based company selling a secure video uploading and conversion platform. Our customers were purchasing transcoding in minutes and gigabytes.

That’s where I got into working with salespeople and making sure quotes were done correctly. We launched Steelbrick there before it became Salesforce CPQ.

That’s also where I started using Zuora, which was a fairly new company at the time.

I was concerned that I showed up a little bit too late. Zuora is a subscription management system, but our Salesforce wasn’t set up correctly to capture all the movements in the sales cycle, especially in the Quote-to-Cash process. There was a big gap around who was vetting data at the point of sale; when you generate the quote, who makes sure the quote is accurate when it hits the finance system?

No one really thought that out before implementing the technology.

We ended up spending a lot of money on consultants to get it right. We needed to create a flat organization where salespeople could operate smoothly while allowing finance to get the credible data required for financial transactions.

I started getting more involved with revenue and Revenue Operations, working with SDRs to make sure they were inputting sufficient and correct data into the CRM that would help the finance team.

For example, salespeople will often create a quote where the “sold to” and “bill to” information is the same, but 99% of the time, that’s inaccurate and creates headaches with the finance department.

Billing is one of the biggest challenges for companies, especially in the SaaS world. You have the initial contract that the term is based on, then you have expansions, movements – and a lot of time you are doing a rip and replace. These things change billing values and treatment, which also means POs need to be regenerated as the billing values change.

That’s how I got into it, and I’m still in it, but it’s challenging. Because, in SaaS, nothing is consistent; things are constantly changing, data is continually evolving, and data is the #1 source of understanding the health of our business.

How the Pandemic Has Changed RevOps

There’s been an explosion in the interest in RevOps over the last 18 months. We’ve seen a lot of people attribute this, at least in part, to COVID-19. How do you think the pandemic has changed the way revenue leaders work?

Fortunately for us, our business has thrived in this environment. We had customers who had a basic digital presence, but COVID-19 forced people to move brick-and-mortar stores online. It created huge expansion opportunities for us, both for existing and new business.

The more significant challenges during the pandemic came around hiring. We grew significantly, which meant I had to build out a Deal Desk from the ground up.

In many organizations, you’ll notice that the Deal Desk sits with Sales Ops; I think that’s a conflict of interest. Sales shouldn’t control the contract; finance should. Essentially, the contract becomes a financial instrument for revenue treatment; it has legal implications and the governance of your product.

When Deal Desk Should Be Implemented

Speaking of Deal Desk, what are your thoughts about when a company should implement a Deal Desk? Is there a particular size threshold for when it becomes necessary?

Why Should a Start-Up Have a Deal Desk?

Deal Desk is something that should be considered early on. Essentially, as your company grows and the organization grows, you will want to raise funding. However, when you want to raise money, the numbers you are reporting have to be validated.

To validate the accuracy of the data you are putting into your systems like Salesforce, you need someone who understands revenue and has the right experience to put that together for you.

I’ve experienced this at a previous company; when I joined, they didn’t have a Deal Desk in place, and we ended up spending hundreds of thousands of dollars to get us there.

If you don’t do it early, it becomes a massive challenge as you grow. It’s easier to have someone dedicated early on, even if it’s just someone doing a manual check. Because if you are not doing that validation step, it’s hard to trust the data two years down the line, and now you’ve got two years of sales data that will need to be checked manually.

Even if you are a Series B company and investors are looking at you for the next round, you will have to share accurate information.

Regarding your goals as a revenue leader, where does this idea of data integrity sit in your list of priorities?

It’s at the top of the list; Data integrity is everything.

We drive everything, from revenue recognition to consumption metrics. In my current role, we actually communicate those consumption metrics to Sales to identify when a customer has exceeded their allotted usage to facilitate upsells.

When you get into the SaaS world, you aren’t in a business to just bill customers and make money every month; you want that long-term commitment. You want that relationship.

You want to see customers go over what they purchased to ensure they are getting value from your product. The downside of that is you have customers that are not using what they paid for; maybe the salesperson oversold them.

So data creates different segments of communication with your customers and other engagement tactics.

With data integrity, you can identify users who have gone over what they purchased and work to get them on a contract. You can also see customers underutilizing the system, flag them as potential churn, and re-engage them with sales and customer success involved.

All that’s possible because of data.

What do you think are the biggest challenges facing someone in a RevOps role today?

As I mentioned before, you will often see Deal Desk being a part of the Sales Ops function, and this is where there’s a lot of confusion happening in the RevOps world right now. Sales Ops is basically now RevOps, and that’s a mistake. Revenue sits in between Sales Operations and Finance, and you’re responsible for that data integrity.

But data integrity is driven through Deal Desk because it engages with Legal and AEs. More importantly, it’s responsible for the accuracy of the data put on the contract and its conversion to a reportable transaction.

What are some of the things you see companies doing wrong in terms of go-to-market alignment?

I really think early-stage companies are waiting too long to pay attention to the data integrity of deals. They’re not investing time, resources to validate data.

And it’s not a massive investment; they just need to hire the right people with the right experience to validate the data that goes into the systems.

Another thing I am seeing is around the training piece. Many AEs are coming from different companies, and there’s a learning curve when they start. Every company has its own pulse; just because one company sells a certain way doesn’t mean the next company you join will be doing the same thing.

Salespeople are the ones who move around most in this environment, and they need to get onboarded with best practices for their new roles quickly.

A critical factor in this training is understanding booking policy because those policies are not uniform across companies. For example, what happens when someone closes a deal on the last day of the quarter, but they are GMT? Does it count for this quarter or next? Those are the kinds of things we need to document and pass on to new hires as revenue leaders.

We often talk about RevOps as being a kind of builder for their GTM organization. What are some of your experiences with this, and how can other revenue leaders make strides towards being a builder?

It’s really all about experience.

It’s kind of like having to go to hell to get to a good place. When I join a company, I can immediately identify areas that are lacking and need attention. I can then go and say, “Let’s build on this; let’s hire the right people.”

Building teams is another critical aspect. You have to hire the right talent that is hungry for growth and committed long term. The building will continue – stage A companies building for stage B companies, and so on. It’s about having the right people, the right mindset, and the right experience.

For me, I’ve gone through hell and back. It’s taught me the management skills for how to treat others and to be professional. When you are dealing with sales teams, things can get testy. One thing that should always be consistent is professionalism in all aspects of your day-to-day. 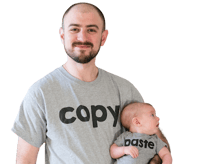 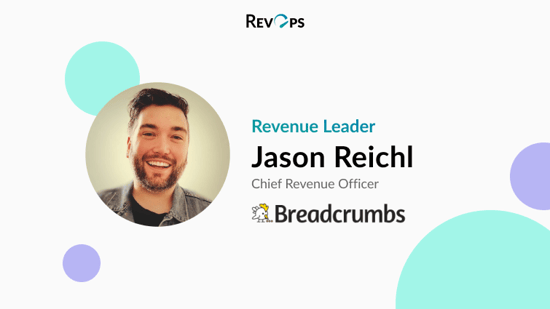 Gap-First Thinking and Breaking Down Silos With Jason Reichl

In this latest installment of the Revenue Leader Interview Series, we had the great opportunity to... 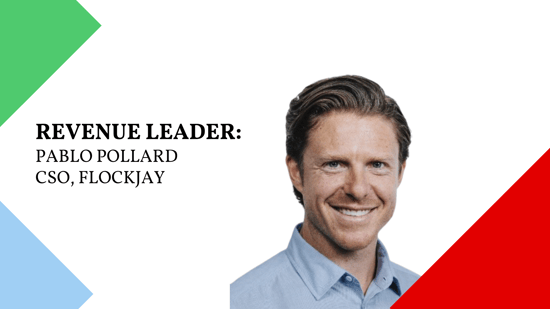 For the second installment of our Revenue Leader Interview Series, we had the amazing opportunity... 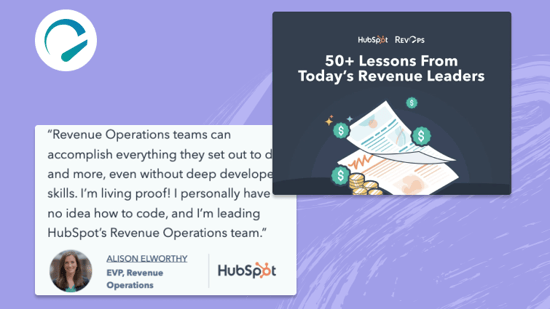