Get Started with the HubSpot Integration

Learn how to set up the RevOps HubSpot integration

What is the RevOps HubSpot Integration?

The RevOps HubSpot integration enables you to map data from HubSpot into your RevOps deals and from RevOps back to HubSpot. This integration simplifies your deal creation process and allows you to maintain data integrity between RevOps and HubSpot.

By integrating RevOps to your HubSpot account, you're able to:

Watch this Overview to see how this integration works. In this guide, we'll cover:


RevOps HubSpot integration is currently available in Early Access. If you run into any issues or have any feedback, please reach out and let us know.

RevOps connects to your HubSpot instance through the standard OAuth connection as a HubSpot app, not as a HubSpot user.

By installing the RevOps HubSpot Integration, RevOps is able to access within the following scopes. Over time these scopes of information may update. 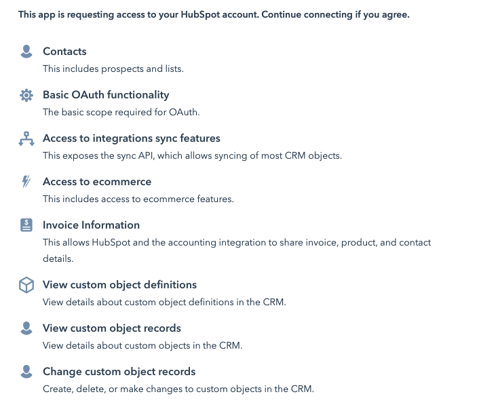 In RevOps, you can start connecting to HubSpot by going to the Integrations page:

Congratulations! Once you've completed all the steps to connecting RevOps with HubSpot, you're now able to create RevOps Deals directly in HubSpot as well as synchronize data between the two tools.

How does data sync between RevOps & HubSpot?

When your RevOps deal is first associated with the HubSpot deal, RevOps will import:

Once you've saved the deal or submitted it for approval, RevOps will also synchronize the updated data for the following fields back to HubSpot.

The following fields will be synchronized from the RevOps Deal object to HubSpot.

Data from the Line Item Object will also be synchronized to HubSpot as custom line items on your HubSpot deal.

If you happen to import line items from HubSpot to RevOps and make adjustments to pricing within RevOps, RevOps will synchronize the updated changes so that the Line Items in HubSpot accurately reflect your Deal in RevOps.

These mappings will behave as follows:

To import your line items from HubSpot, data will be mapped and synchronize in the following ways:

Disconnecting the HubSpot Integration from RevOps?

Without removing the connected app, RevOps CRM cards will continue to appear on the sidebar but will not display any RevOps content.