Get Started with RevOps for HubSpot

Learn how to set up RevOps for HubSpot

What is RevOps CPQ & Deal Desk for HubSpot?

The RevOps integration built for HubSpot enables you to map data from HubSpot into your RevOps deals and from RevOps back to HubSpot. This simplifies your deal creation process and allows you to maintain data integrity between RevOps and HubSpot.

By integrating RevOps to your HubSpot account, you're able to:

You can read more about our integration and its capabilities on our HubSpot Marketplace listing page.

Watch this Overview to see how this integration works. In RevOps, you can start connecting to HubSpot by going to the HubSpot Integrations page:

When authenticating with HubSpot, you will be prompted to select the HubSpot account you would like to connect with.

If you have a Sandbox environment that you would like to try this integration with, feel free to select that Account. You can always disconnect and move the integration to another HubSpot account later. 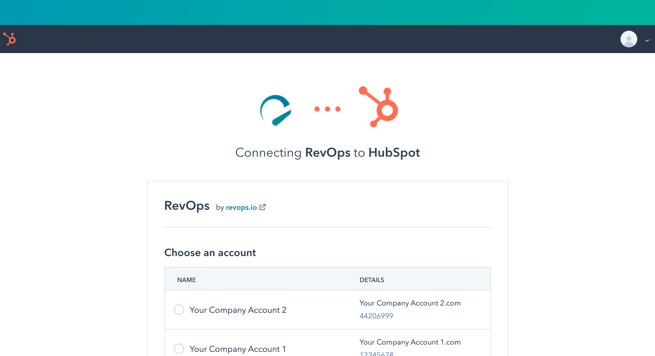 Congratulations! Once you've completed all the steps to connecting RevOps with HubSpot, you're now able to create RevOps Deals directly in HubSpot as well as synchronize data between the two tools.

How does data sync between RevOps & HubSpot?

When your RevOps deal is first associated with the HubSpot deal, RevOps will import:

Once you've saved the deal or submitted it for approval, RevOps will also synchronize the updated data for the following fields back to HubSpot.